Adding to the spiritual ambiance of the city is the Bhadrakali Temple, situated in Thanesar. The temples happens to be one of the oldest shrines of Maa Bhadrakali witnessing worshipers on a daily basis to seek blessings and strength connected with the deity. The temple is part of the Shakti Peeth and represents the power of shakti. It is believed that one anklet of Mata Sati fell into the well of this temple. As a result a structure of the anklet was made that reflects the tale and is worshiped right in front of the idol of the goddess.

The worshipers are known to offer terracotta and mud horses as a result of which their wishes are fulfilled. This practice has been present for ages and continues to be regarded highly by hundreds of worshipers who come here each year. Bhadrakali Temple in the truest sense generates shakti by giving strength and belief to the devotees and one feels immensely pure and peaceful after visiting the temple. 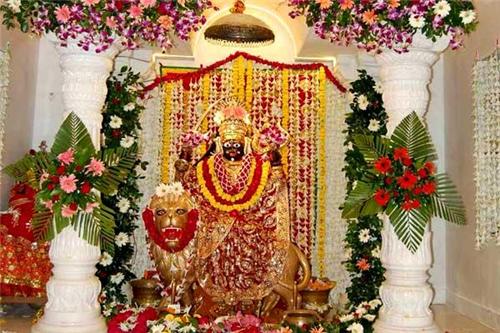 About Bhadrakali Temple in Thanesar

The Bhadrakali Temple is solely dedicated to the goddess of shakti, Mata Bharakali. One of the eight forms of goddess Kali, festivals see a number of visitors make way to this temple. Inside of the temple is a simple structure like most Hindu temples. The idols are places right in front as you walk in with enough area for devotees to sit during prayers being conducted here. Alongside the temple is a room that is placed for kirtans and larger gatherings. Along with the idols of Mata Bhadrakali, one will find those of other gods and goddesses too that surround her idol.

The ritual of the horses being offered here also has a myth in connection to it. It is believed that when the Pandavas won the battle of Mahabhrata, they visited the temple and began to follow the goddess of shakti. In turn to pay homage to the goddess, they presented their horses in her respect.  As a result of this gesture, followers till date continue to present terracotta and metal horses in front of the deity and believe that it fulfills their wishes and desires.

How to Reach Bhadrakali Temple in Thanesar

The temple is located on the Jhansa Road, very close to the Old Bus Stand in the city. One can take buses, autos to reach the temple. Haryana Roadways buses have direct routes that lead to the temple which is well known across the region.  Devotees also prefer walking to the temple from far distance as it is believed to give them more strength and is most likely and offering too towards the goddess.

There is great rush throughout the year in the temple, but there are also those times that one must be here. This includes the nine days of Navratras when a rush of people comes to the temple all day long. There are kirtans and paths conducted. People also visit the temple for mundans and other spiritual rituals. The temple is open from early morning at about 5.30 am to late evening at 8 during the summer time. During winters the opening is postponed by approximately an hour and closes half an hour early. During special festivals one can expect the temple to remain open for more time as it welcomes devotees.