Adding to the serenity and religious sentiment associated with Thanesar, the Brahma Sarovar is a place one must visit when here. Not just for religious purposes but the experience gained here in totality is something people don’t forget easily. Sarovar, a water tank that surround the city is dedicated to Lord Brahma. It is a well known fact that Lord Brahma is known to be the creator of the universe, ‘brahma’. The Sarovar is spread beautifully into an expansive space where you will find devotees sitting for hours, absorbing the calmness and seeking blessings from the gods. 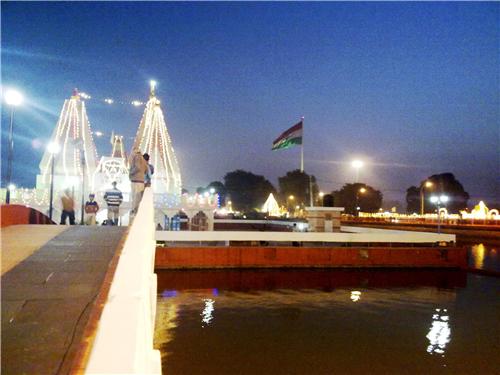 About Brahma Sarovar in Thanesar

Brahma Sarovar is regarded as a very holy spot and the belief continues to build more with each year. There is a vast increase in the number of devotees to who visit the sarovar. A dip in the water tank is known to clear their impurities and allows purify their souls. When here you will see how people of all ages take a dip in the water, some even take it back with them. During the time of Solar Eclipse, the Brahma Sarovar can be seen in a different light. It is believed that this is the most auspicious time to take a bath in the holy water.  Many offerings are made during this time along with many spiritual routines conducted in the vicinity.

Lord Shiva devotees also visit the temple as there is a Shiva shrine placed on the banks of the Brahma Sarovar. It is also believed that Lord Brahma himself has placed the Shiva Linga in this shrine dedicated to Lord Shiva.

How to Reach Brahma Sarovar in Thanesar

One can reach Brahma Sarovar remains at a very short distance from parts of Haryana and Punjab. One can easily take a taxi or enjoy a bus ride. There is facility to stay near the Sarovar thus one need not worry about accommodation. The Sarovar forms as one of the main sites in Thanesar, thus is easy to locate and known by all locals. The Sarovar has to its west side the Kurukshetra University which has buses and accommodation too. It falls at a walking distance so one can make way to the Sarovar from there as well.

The best time is definitely during winters. You will see birds flock past the river and it remains to be a visual delight. The months of October to mid March are perfect for a visit to take a dip in the holy water and purify one’s body, mind and soul.