Going by the religious nature of Thanesar, towns nearby too relate to the same. This in turn makes the region and nearby areas very sacred as there are many temples and sarovars that attract pilgrims from all parts of the country. Sannihit Sarovar near Thanesar is another such location without visiting which, one’s religious tour remains incomplete. The place is worth every minute spent there as the sound of bells in the temple and the pujas done all along the day give one a sense of calm. The bath in the holy tanks of Sannihit Sarovar is extremely holy and one can visit it during various occasions seeking blessings. 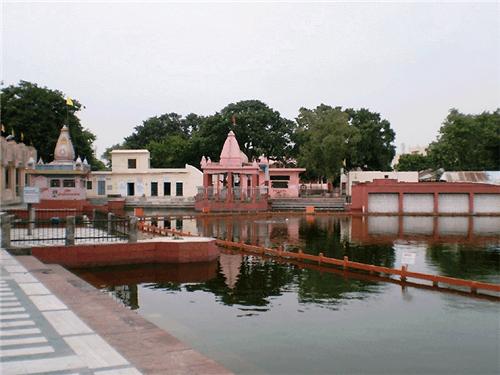 About Sannihit Sarovar near Thanesar

The temple, situated few kilometres away from the main city of Thanesar falls on the Pehowa road in the region. Since there are other sarovars in Thanesar like the Brahma Sarovar, Sannihit too is counted as part of the same area, distanced by just few minutes. The sarovar as known is the point where seven Sarasvatis are meant to meet. The water naturally becomes sacred and falls under the same belief if we go by popular tales. During the time of Amavasya, when there is complete darkness in the sky, one is to find the maximum number of visitors in the city.

The reason for this is the fact that visits during this time gain blessings of the highest order. If you take a dip in the tanks during this time, your sins will wash away too purifying your body and soul. To witness just this, people come to this part of the region every year and especially during this auspicious period. During Shradhs too, which is an important time for many religious people, baths in the holy water of Sannihit Sarovar is considered very favourable.

Those who visit the sarovar further carry out memorial services like pind daan and offer prayers to the gods and goddesses whose blessings they come to seek and get in turn. You will see here shrines of Shri hanuman, goddess Durga, Lord Vishu whose abode Sannihit Sarovar is known to be. Many Purohits, who are sacred people come to this very sarovar and offer their services in various forms. There is a special connection that they have with this holy water tank where they come each year and also keep records of the pilgrims who visit. In this manner they maintain their association with the sarovar and are a part of it in whichever way possible.

How to Reach Sannihit Sarovar near Thanesar

Sannihit Sarovar is just 3 kms away from Thanesar. Since there are many pilgrims who visit the site you will find many travel arrangements. Right from buses, autos to cabs, there are all transport mediums applicable to reach the sarovar.

The best time to visit the Sannihit Sarovar is between the months of October to early March. During Amavasya, one must make time to come here as it is one of the most auspicious times to find yourself at the sarovar, next to the holy water and washing away all impurities.