The Sheikh Chilli’s Tomb falls synonymous to the city of Thanesar as it is one of the most historic sites situated in this city of Haryana. This very tomb was built for the Sufi Master who was popularly known as Sheikh Chilli during the Mughal Period. It so happens that the Sufi teacher taught a Mughal Prince, Dara Dhikoh. Backed by a structured architectural plan, the tomb has several other structures close to it, those which we will find out about below. 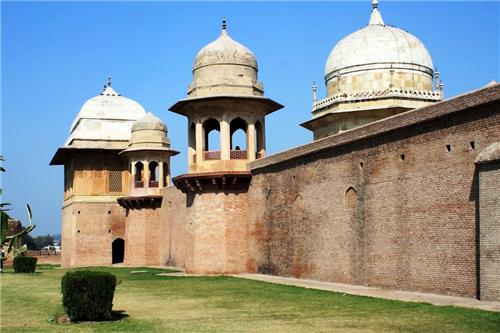 About Sheikh Chilli’s Tomb in Thanesar

Based on Persian influences of architecture, the tomb is a huge monument. There are beautiful gardens that surround the expansive site making it all the more soothing to the eye. The Archaeological Survey of India (ASI) works in close association to protect this monument. The structure is so pristine that its value has often been compared to that of Taj Mahal. Next to the Tomb is a masjid that is built in red sandstones. A holy spot, worshipers gather here to pay respect with verses from Quran inscribed all around making it all the more pious. This most certainly adds to the monument and the masjid in totality.

When visiting Sheikh Chilli’s Tomb, you will be astounded to see the gardens. These gardens will take you back to the Mughal Period which spoke of nothing less than lavish. The space is widespread and you will see beautiful plants that form the main part of these beautiful gardens. A walk through the Sheikh Chilli’s Tomb will take you back to the time of this Sufi teacher. He taught the eldest son of the fifth Mughal Emperor Shah Jahan. Son of Shah Jahan and Mumtaz Mahal, Dara was only twelve when his father became the emperor and with years ahead, he was one of the heirs to the throne.
The tomb by all means reflects not just the Mughal architecture, but takes you back to the period, its characteristics and the lifestyle that was followed then.

How to reach Sheikh Chilli’s Tomb in Thanesar

The tomb is located in Thanesar and happens to be one of the busiest tourist spots. It is so also because many sites are located in the same vicinity, thus commuting becomes comfortable. To reach the monument, one can take buses. The roads from Delhi, Gurgaon, Faridabad and parts of Punjab are very well connected by the same. AC and non AC buses function from these parts bringing you directly to the city. Once at the Bus Stand, you can take an auto at a nominal price and reach the tomb. Also, flights and rail medium can be used to make way to Sheikh Chilli’s Tomb in Thanesar.

The best time to visit the tomb is between 9 am to 5 pm. The tomb premises are open all seven days of the week. There are nominal charges which visitors must pay to enter the site. A price of  ? 5 only is the entry fee per head to enter the Sheikh Chilli’s Tomb, thus making you visit to Thanesar a complete one.

Explore more about About Thanesar